All of us exist for real and not-for-real, which is a wee bit weird if you ask me.

I also have a  of animal-comrades. You’ll be able to meet some of them when my human finishes their story-books. I love and admire my animal comrades very much and I hope you will care for them as well, as soon as you get to know them.

This Earth-ball needs much more love, right?
And I’ll spread as much of it as I can.
I’d be so totally happy if you’d help me with this important task. Would you?

Some of my human friends have had a lot of time to get to know me on Facebook.

If you want a getting-to-know-me short-cut, then scroll down and sign up for my wee-mail.
A welcome present will be the Total Introduction-Thingy PDF to my book: The Big World According to Little Hunterman.
(We did add it to the latest version the book.)

All of my wee-mail friends get to get this PDF-thingy. 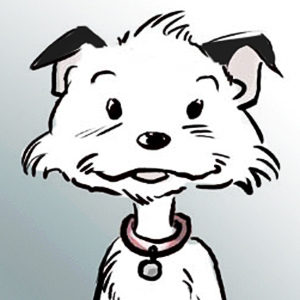 Little Hunterman is the cartoon dog version of a rather shy and risk averse Parson Russell Terrier called Hunter.

He fears open windows but loves to be outside, dislikes dog food but treasures found leftovers (and croissants), detests changes in his holy routines and rituals but delights in extra rounds if they include rat-chases of any kind.

Little Hunterman has a strong sense of order and how the world around him is supposed to behave. No exceptions — unless he came up with the new rule himself.

Flynn, a rubber duck, had his tail chewed off by a young and rather overexcited Hunterman a few years back. Since then, for fear of sinking, Flynn has been terrified of anything resembling water, avoiding any contact with it — a fact that makes body hygiene rather challenging.

Hunterman has accepted the responsibility for his actions and not only became Flynn’s best friend and protector but also carries the little rubber duck around with him whenever he goes out. Because of his smelly self, Flynn’s place is on Hunterman’s tail, and thus as far away from the sensitive dog-nose as possible.

Flynn can be an arrogant and self absorbed little rascal, but we all love him dearly.

Lassal-human is an engineer turned artist.

Some years ago, while attempting to take more breaks from sitting and working at her desk non-stop, she got to know a little Parson Russell Terrier and fell madly in love with him.

Back then, she used to work for big international commercial agencies and corporations. Now, she works pretty much only for Little Hunterman.

With a Little Hunterman in tow, her life has gotten so much more complicated, but ah, so extraordinarily more rewarding!

Together, they share the worries and joys that come with having a Little Hunterman.

While Lassal-human is the stern one who insists on being the leash-leader, Tony-human calmly and without fail allows Hunterman to wrap him around his little paws — and to pull him along.

Hunterman loves him dearly for this.

(And he also loves him for the zombie-chases and extra croissants.) 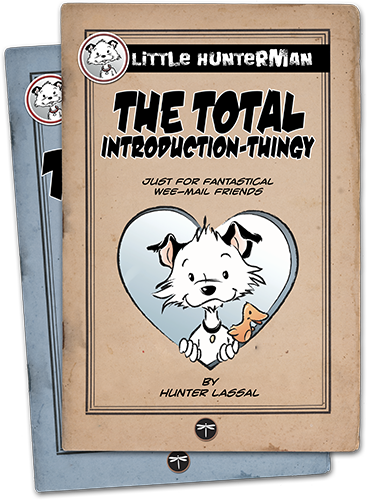